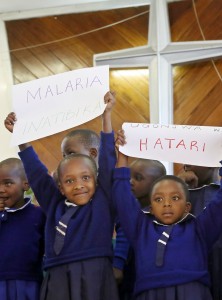 During the AAUW New York State Summer Leadership program, funds were collected to provide bed nets to help prevent malaria through Nothing But Nets. This program is supported by the United Nations Foundation which was started by a $1 billion donation from Ted Turner.

During a recent interview by Timothy M. Gray for Vanity, Turner stated that “I could be doing more!”The following is an exerpt from the August 3, 2012 story:

“TG: Were those your goals when you pledged $1 billion?
TT: I had prepared my acceptance remarks (for the U.N. Man of the Year honor). I was ripped apart by the knowledge that the U.S. owed the U.N. a billion. I thought, ‘Why don’t I give them some money?’ Nobody had ever given them a billion. I didn’t know that until later. But the U.N. could not receive money from individuals or corporations. Did you know that? Nobody’d ever tried to give the U.N. money. So I thought “God doesn’t want me to give away that billion!” (laughs) And I’d really worked hard for it! I was gonna buy CBS or something. I was going to do like all the other moguls do, just keep buying things. And what do you do when you buy them? You make more money and buy something else. I was doing that, I was buying a lot of things.

I went to bed thinking I wasn’t going to (make the donation). And I didn’t feel good. Then I woke up in the middle of the night and thought, “Why don’t I create a foundation that works alongside the U.N.?” If the Foundation did only Nothing But Nets …, it would be worthwhile. But it does so much more.

For example, the Girl Up program is extremely important. Half of the women in the world don’t have equal rights with men, and there’s no excuse for that any more. Women have been pushed around enough.” — Sept. 2012

Ted Turner is My Sister’s Keeper.

About 3,500 women United Nations Peacekeepers  protect the rights of millions in some of the most dangerous, war-torn regions on earth.

Why are these women so important? Female Peacekeepers act as local role models, inspiring women and girls in often male-dominated societies to push for their own rights and for participation in peace processes. For example, the woman in the photo above is a UNAMID Peacekeeper working in the Zam Zam IDP Camp in Darfur. She has been working with local women to take larger roles in their communities. She is making a difference, leading the way for a new generation of young women to seize new opportunities.
If you would like to thank a UN Peacekeeper, click here.