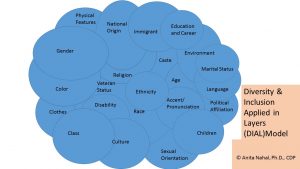 s: Have there been times when you were personally discriminated against?

Crenshaw: I have a story I tell a lot. A member of our study group at Harvard was the first AfricanAmerican member of a previously exclusive white club. He invited the rest of the group—me and another African-American man—to visit him at this club. When we knocked on the door, he opened it, stepped outside, and shut it quickly. He said that he was embarrassed because he had forgotten to tell us something about entering the building. My male friend immediately bristled, saying that if black people couldn’t go through the front door, we weren’t coming in at all. But our friend said, “No, no, no, that’s not it—but women have to go through the back door.” And my friend was totally okay with that.

Perspectives: How did that affect you?

Crenshaw: I understood that we can all stand together as long as we think that we are all equally affected by a particular discrimination, but the moment where a different barrier affects a subset of us, our solidarity often falls apart. I began to look at all the other ways that not only the race and civil rights agenda but the gender agenda are sometimes uninformed by and inattentive to the ways that subgroups experience discrimination.”

The term “intersectionality” was first coined by legal scholar Kimberlé Crenshaw in 1989, a snippet of whose conversation in an interview appears above. Crenshaw had argued in her research that “…the experience of being a black woman cannot be understood in terms of being black and of being a woman considered independently, but must include the interactions, which frequently reinforce each other.” This same kind of intersectionality, many individuals feel and go through, though not always due to race or gender.  It could be these two, plus nationality or religion or sexual orientation, or immigrant status. Or it could be any other combination as well.  When individuals find themselves standing at the center of various intersections that can define them within their own understanding, or others can employ to define them, it becomes a challenge for diversity and inclusion.  And since the intersection is not stagnant or set in stone, individuals keeps interacting with so many diversities (their own and those of others), they can lap and overlap causing even more confusion. That is why the DIAL method for understanding our various layers was developed (Nahal). It stands for Diversity and Inclusion Applied in Layers.  Read more here https://www.linkedin.com/pulse/layered-applied-diversity-inclusion-ladi-model-nahal-ph-d-cdp  In another write up we shall discuss this more. Indeed the concept of intersectionality is very critical, one that Michelle Rivera-Clonch, PhD, Director of the Omega Women’s Leadership Centerone also noted it in her keynote speech at the 2017 NYS AAUW convention.

We need to remember that individuals are not mono-lithic, and no one race, group, etc. is monolithic either. Thus we need to make sure when interacting with individuals that we don’t type cast them.  We need to reduce the impact of our pre conceived notions, and unconscious bias that our first visual impressions give us. Princeton University psychologists Janine Willis and Alexander Todorov conducted research published in the July 2006 issue of Psychological Science, which showed that it only takes seven seconds to form an opinion about others.  However, that is based on simply visual representation.  And individuals are much more than what is apparent to the eye. Next time we will discuss the Iceberg theory related to this.  Cheers!