In addition to AAUW Mission-Focused Programming, the weekend will include:

Cooperstown has lots to offer you and your friends, along with attending a great convention!

CELEBRATE THE CENTENNIAL OF WOMEN GAINING THE RIGHT TO VOTE IN NEW YORK STATE ON NOVEMBER 6, 1917
FIND LOCAL AND FAMILY SUFFRAGISTS

There are bound to be Suffragists in your area. Thousands of people across New York State formed grassroots organizations to bring male voters to the realization that women should have the right to vote. You can find them in your communities. Honor these brave people who worked tirelessly to obtain the vote for women.
You will find it exciting, interesting, rewarding and meaningful to discover these courageous people who fought so hard to “Give Women the Vote”.

PLACES TO GO:
1. Contact the County Historical Society
2. Contact the Town Historical Society
3. Ask the Town Historian (They love to share)
4. Visit the Local Library-They house historical documents
5. Ask librarians if they know of any suffragists
6. Talk to people you think might know of suffragists
7. Follow up on any leads
8. Find a book on the history of your area and who wrote it. You may find this by using the web and/or interlibrary loan
9. Read the book chapters that maybe useful on the web
10. On the web try different key words and various combinations of words-use your imagination for example: Make up the possible name of a suffragist society or club
11. Try the Library of Congress data base using key words
12. Research the Fulton History Project. It indexes hundreds of old newspapers around NYS
13. Explore old digitalized NYS newspapers at http://nyshistoricnewspapers.org articles contain info about suffragists, events and provide names which can then be followed up
14. Search in NYS Library Suffrage catalog and request files with suffrage connections
15. Access on line university archives.
16. Investigate museum archives especially women’s museums
17. Seek specialized local libraries-a letter will reveal names
18. Search your own home attic-relatives papers-those related to you
19. Ask family members-amazing what you will find.

It is a thrilling adventure finding these people who gave so much of themselves so that we can have the vote. Their stories will capture your interest and your heart. 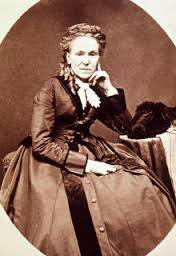 We know we are right; we know we shall be successful, we know the day is not far distant, when this government and the world will acknowledge the exact and permanent political equality of
man and woman.
– Matilda Joslyn Gage 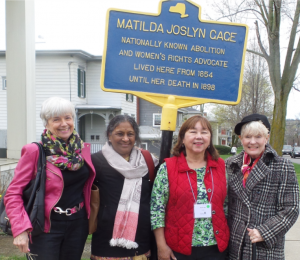 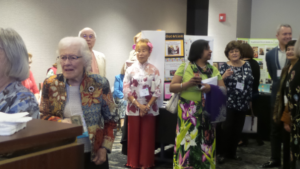 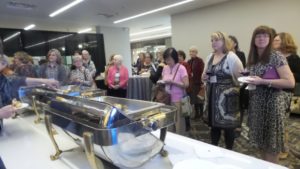 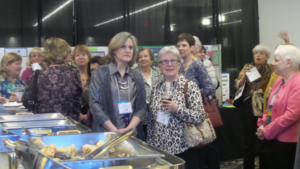 Congrats to the organizers, speakers
and all those members and friends
who contributed to the success of
the AAUW NYS District V Conference on
“Diversity and Inclusion in Today’s Workplace”
held at Mt. Sinai Hospital in New York City on October 15, 2016. 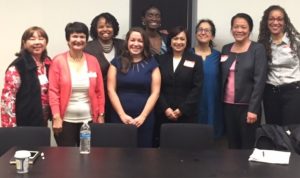 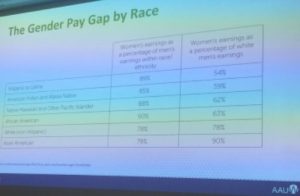 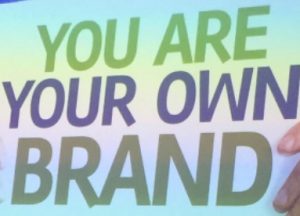 The Gender Pay Gap by Race

My Start Smart AHA moment was when I realized that I could have gotten a much higher salary during the role playing exercise. I feel that instead of taking the employer’s word , I should have negotiated more; now I know better!  I really enjoyed the workshop and I learned quite a bit. I want to thank you and everyone involved for taking the time to share this very valuable information with us.

Each person picked a gem of their choice as they registered for our AAUW NYS District V Conference on “Diversity and Inclusion in Today’s Workplace” held at Mt. Sinai Hospital in New York City on October 15, 2016.

Diversity and Inclusion is a mosaic of gems reflecting persons from different age, gender, sexual orientation, national origin, ethnic, socio-economic, health and spiritual cultures including the culture of the Deaf, each with unique ideas and abilities. The Empire State Virtual NY Branch is committed to integrate the value of Diversity and Inclusion in the programs and activities of the branch as well as embed in leadership and organizational structure of the Branch. 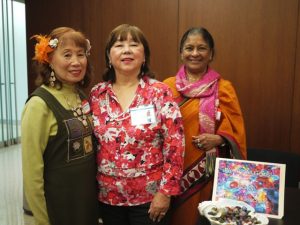 The Empire State Virtual Branch have four initiatives for 2016 and 2017 as our commitment to D&I. and to continue the attempt to embed in leadership and organizational structure of AAUW the value of diversity and inclusion.

Has Title IX helped women compete in the Olympics?

As you know, every two years, the Olympics ignite fervor, national pride, and competitiveness as the world’s greatest athletes come together. For female athletes in particular, the Olympic Games is a rare opportunity to garner international attention for their performances.

At this year’s Summer Games in Rio de Janeiro, women outnumber men on the U.S. team for a second straight games — 292 women to 263 men — setting the record for most ever female Olympians competing for a single nation. Thanks in part to Title IX, the 1972 law combating sex discrimination in federally funded education and athletics, U.S. women have secured greater access to play and compete, thereby expanding their opportunities to succeed athletically at both professional and Olympic levels.

Congrats to all the ESVB members and friends who made possible winning so many awards at the AAUW NYS Convention April 15-17, 2016, Saratoga Springs Holiday Inn, NY

Ten Reasons to Attend
the District V Conference
Focus on Feminism:
Past & Present, Near & Far

To register for the conference, click on the link:  AAUW District V Conference Registration Form 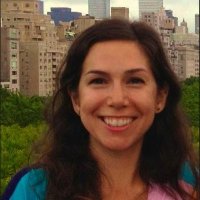 We are delighted to welcome, Juliet Tarantino, newest primary member of the Empire State Virtual Branch! During fiscal year 2015-2016.”

Juliet Tarantino joins the AAUW with international experience in education and academic training in anthropology (MA in Anthropology for The New School for Social Research). While an undergraduate student at the University of New Hampshire (Dual BA in Anthropology in International Affairs), she organized and led a week-long social justice awareness trip of twelve students to Nicaragua, where trip participants learned about the work of local grassroots organizations and facilitated classroom art activities. Her thesis, based on original research she conducted in Ecuador, examined the entanglement of Ecuadorian Otavaleño’s rejection of tradition alongside their utilization of distinctive traditional dress to bolster their sales of artisan-made items. After graduating from college, Juliet was selected by the Spanish Ministry of Science and Education for the position of North American Culture and Language Assistant and taught English in Madrid.

Back in the U.S. and determined to maintain the level of Spanish fluency she had gained in Madrid, Juliet took on the role of Bilingual Intake Coordinator at an immigrant legal services and refugee resettlement agency in Chicago. There, she compiled a series of client stories expressing how their lives had changed after gaining residency in the U.S. She also worked as an independent translator, translating personal statements in support of VAWA cases. Inspired to engage more critically with issues of social justice, Juliet gained her master’s degree in New York City, and began teaching academic research writing to college-bound seniors from underserved high schools. She also coordinates low-cost Spanish classes in her Brooklyn neighborhood as a means of building community. She is interested in immigrant and refugee issues, scholastic achievement gaps, and using research and education to teach social justice.